Brief history of the family

The first mention of the Malina family dates back to the first half of the 17th century. Only one brach of the family is talked about in the following overview - the one that leads to Frank J.Malina and his closest living relatives.

Most of the family members held important positions in their community already from the 17th century on. One such position was the reeve, who maintained relations and communication between  the gentry and the subjects in the village.

The chronological lineage of the branch is as follows:

Frantisek Malina (1881-1959) was born in Horni Becva. When he was 4, his mother died at childbirth. His father, Josef Malina, was a butcher and a pub tenant. He did not do very well, so they often had to move. This was perhaps the reason why Frantisek Malina decided to emigrate at the age of 16, together with his uncle Pavel Malina. Their destination was the United States, as for many other Czechs and Slovaks those days.

He settled in the city of Brenham, Texas. A lot of people from the Austro-Hungarian Monarchy, later Czechoslovakia, emigrated to Texas at that time and established a large community. Since he was a gifted musician, Frantisek asserted himself well there. From 1905 to 1908  he played in the 27th Army orchestra with which he also spent some time in Cuba. After completing studies in Chicago, he became a flugelhorn soloist in the City orchestra in Houston. Later he moved back to Brenham where he became the director of the dance orchestra American legion band. He also earned some extra money as a private music teacher.

In 1911 he married a Bohemian immigrant Karolina Markova whom he met in the Brenham orchestra where she played the piano. She also played the organ in the local German Lutheran church of St. Paul. Their son Frank was born in 1912, their daughter Carolyn  in1915.

Most likely, the longing for their homeland was the reason for their return to Czechoslovakia, the region of their youth. They settled in the town of Roznov pod Radhostem where Frantisek Malina ran the "Elzer" hotel. Roznov was already a small spa town at the time.

The young Frank went to elementary school there and then studied at a high school in the town of Valaske Mezirici. However, doing business in the new republic did not go well for them. They were not pleased with the local conditions and the locals were not very fond of them either. This may have been be the reason for their immigration back to the USA. In 1925 the whole family moved back to Brenham for good.

Frank was musically gifted after his parents and, like them, played the second flugelhorn in the Brenham orchestra. In 1930 he enrolled at Texas agricultural and technical school about 50 miles from Brenham. Besides his studies, he also played in the school orchestra at various events and thus he supported himself during studies - he became the school trumpeter. His professor of technical drawing, who was also a painter, recommended him to study architecture but Frank had already set his mind on studying aerospace engineering at the time. 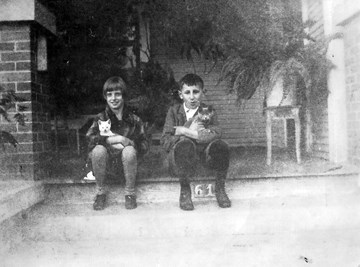 Frank and Carolyn on doorstep of native home 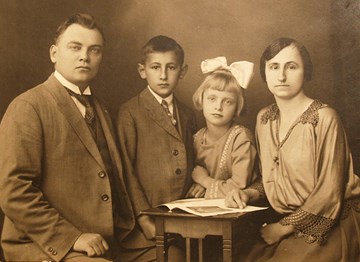 Return from Czechoslovakia to USA 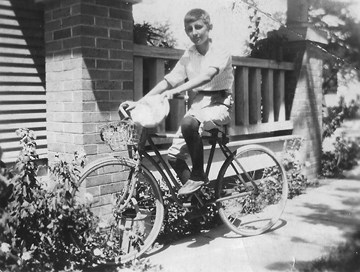 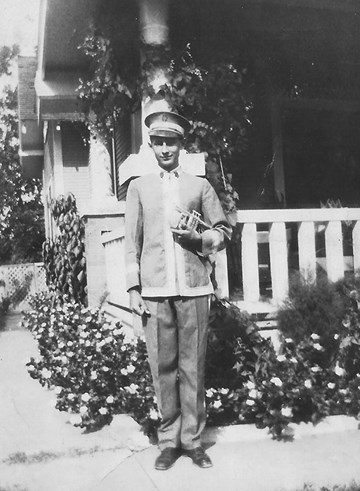 Frank at uniform of military orchestra 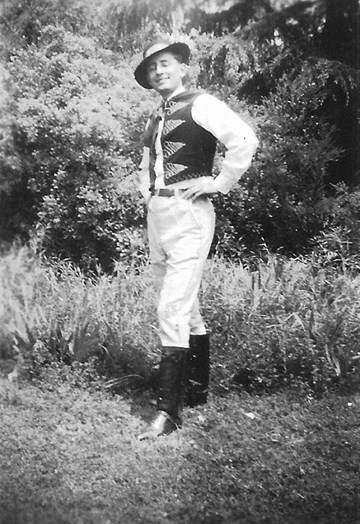