The importance of Malina´s works

In modern era, it is difficult to find a person in whom science and art would connect so happily. That applies not only to the scientific and art skills, but also to the achievements which he reached, and above all to the strength of Malina's inventiveness which he pursued in this field of human endeavor. And that is why, in case of Malina, the great number of inventions from the astronautics and rocketry is balanced by various news in the area of art.

Comments on Malina in his article about kinetic art:

A person like Frank Malina embodies a human of Leonardo's type who is able to realize the future by his calculations and send cosmic facilities to the space and simultaneously give his projects the shapes of pictures.

Taken from the article "Precursors and preconditions of kinetism" published in the magazine "Acta scaenografica" volume 6 No.11/1966/

The diversity of expressions and themes, originality of new plastic language and the cogent message, organic contact of art and science, humanisation of new spheres of reality, plastic description of abstract imagination and rational concept, co-ordination of the most contradicting rhythms and movements, these are the characteristic features of Mr. Malina's work what makes him to be the most famous person of luminous art. Only Mr. Nicolas Schoffer obtains the wide spectrum of Malina's kinetic work. His initiative work intervenes in almost all-kinetic branches and the most cogent results were at the sphere of spacedynamism and cybernetic control of moving construction. Mr. Jean Cassou's answer in a catalogue of one of Mr. Malina's exhibition is very convincing for those who still have doubts about art that can not exist in other way than in the form of a tradition statue and picture: Creative ability of an artist is essentially the same, but the relationship of an artist with the world and his means of expression, his materials, his techniques have changed e.g, in Renaissance, in the epoch of great scientific changes and it must be also changed in our epoch. It would be very absurd to confuse this essential function of art with its means that remain in every epoch. We must believe that art will be rained essentially if we do not use oil paint and stone. Because oil and stone do not have anything essential, absolute, privileged. And art of our epoch will be remained as art using electricity.

I first met Frank in 1946 when he was travelling  round Czechoslovakia and came to visit us. I was 13 years old.

I can remember more from his next visit in 1953. At that time I was studying piano and he wanted me to play famous, mostly Czech composers for him. He loved music and said he could listen to me the whole night.

In 1966 he visited us with his mother Carolyn, wife Marjorie and both sons Roger and Alan on the occasion of his exhibition in Prague. Despite the language barrier we spent a lovely summer day, which was captured by my husband on 8mm film.

With Frank in Czechoslovakia 1946

My family and Franks family in Czechoslovakia 1966

As one of few Frank's relatives in  Czechoslovakia I could speak English so I was in written contact with him as well as with his father František.

I remember that Frank arrived in Czechoslovakia in 1946. First he visited Prague for several days where he had some business to attend, then he arranged the family reunion in the Alcron hotel. He also visited an opera performance of the Bartered Bride in The National Theatre, which he liked very much. Then he left for a visit of his relatives in Verměřovice near Letohrad/east Bohemia/ where he wrote a letter to me describing his schedule of his following stay here.

His next visit to Czechoslovakia was a year later in 1947 when he visited us in Frýdlant nad Ostravicí and other relatives in Rožnov pod Radhoštěm, Frenštát pod Radhoštěm and in other places in the north Moravia. My relative, who was a policeman, cofided in me later that the local police was on alert at the time. The political situation was beginning to change slowly and it was quite likely that certain institutions took interest in him.

I don't have any more memories about his next visit which was sometime in the 50's, but in 1964 I went to Paris at his invitation. My husband was supposed to go with me but because he refused to collaborate with the Czechoslavak secret service - they wanted him to collect information about Frank while staying in Paris, what he does and what people come to visit him and so on -  they didn't let him go with me and I went on my own.

During that week he and his wife Marjorie took care of me, showed me around Paris, we went to a performance in Moulin Rouge and visited several exhibitions. I remember that once there arrived a limousine for Frank and Marjorie and took them to the US embassy where there was a reception with the participation of the American president L. Johnson. On this occasion Frank gave him one of his works.

His next visit to Czechoslovakia was in 1966 when he had an exhibition in Prague. He came with his wife Marjorie, sons Roger and Alan and his mother Carolyn. We spent a wonderful time with them. I remember calling them all for lunch, but we couldn't find the sons who, in the end, turned out to be on the highest branch of an old cherry tree we had in our garden.

The beginning of the 70's was the time of „normalization“ and our contact was unfortunately cut off. But wonderful memories of my cousin Frank Malina remained. 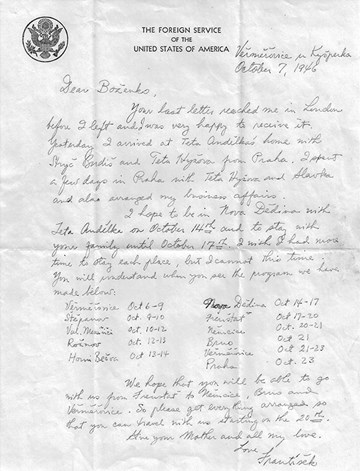 Itinerary of Franks visit to Czechoslovakia 1946

With Malina family in our garden 1966