Beginning of an artist

Malina was talented already as a little boy. At first he liked to draw, later he earned some money by selling technical illustrations to various scientific publications and after the war he was taught to draw by the New Zealand painter Mr. R. Weston. From that time he kept trying to use his scientific moods, thoughts and imaginations inspired by the modern world in the language of visual pictures and plastic forms. Soon he realised that the existing classical art techniques that had been used so far were not appropriate were not capable of  interpreting the experience and imagination of a totally different order. 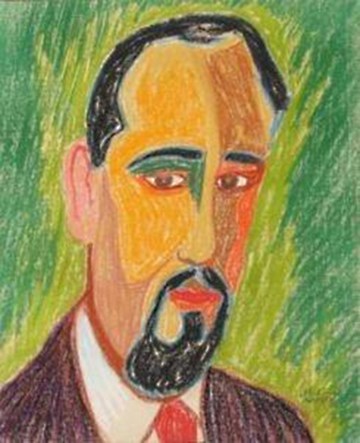 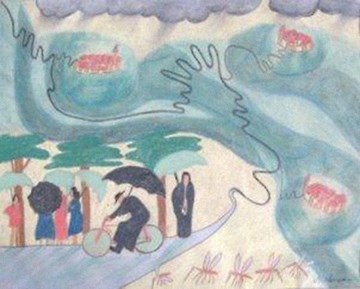 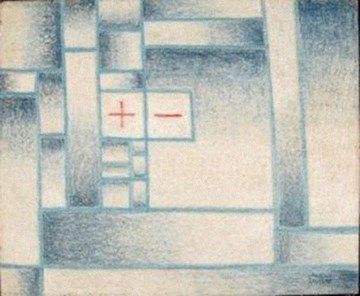 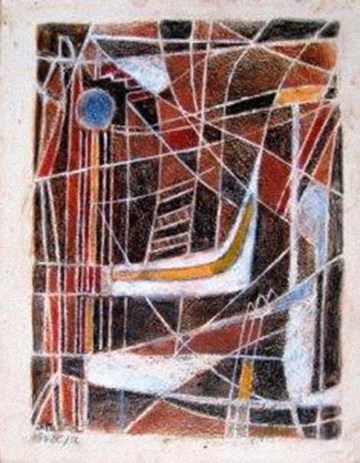 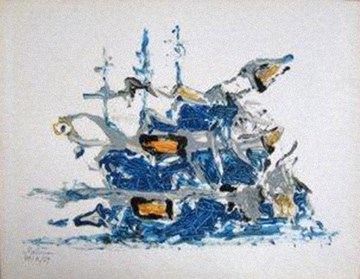 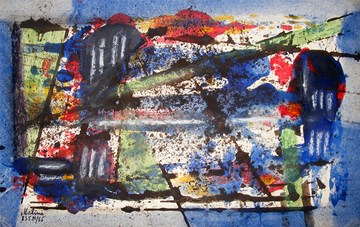 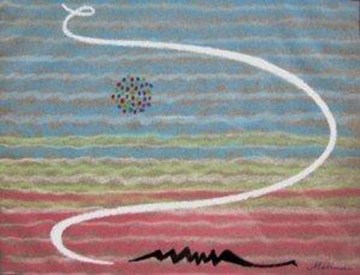 Leaving a brush, paint and linen behind was one of the first  Malina's  steps on the way to a new art. He tried to create a picture, or rather a pendant object, from new, non-traditional materials. At first he used ropes, wires and cables from which he made geometric structures on a flat, neutral background. Later on he replaced this technique with a rhythmic ortogonally coloured wire mesh where he created linear curved pictures from intersected steal cord. In 1954 he constructed several objects using a moire effect that is nowadays one of the main techniques of optic art. This effect was created when spectactor's eyes were moving in front of two fine screens laid on top of each other, where you could see constantly changing dynamic pictures. This was the first time  Malina had brought movement into his objects, however, not yet real mechanic but virtual optic. 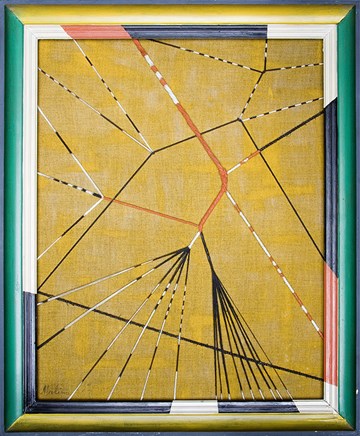 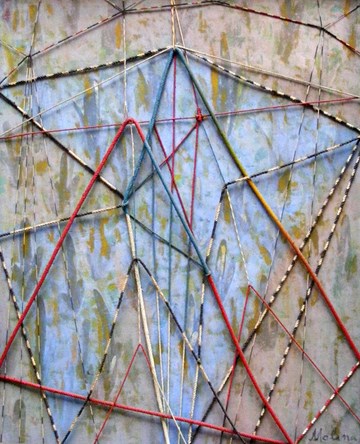 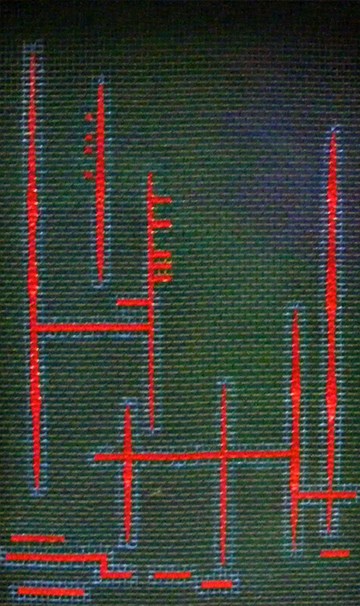 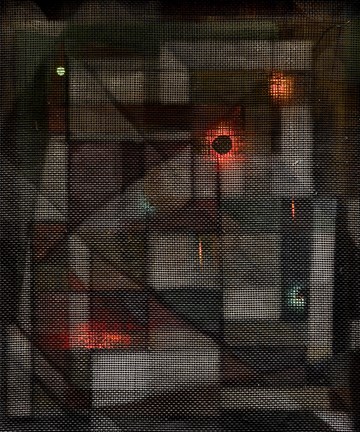 Within a short time there was a new series of objects, so-called time-paintings, where  Malina introduced real light which, as a fixed and permanent source, highlited from the background a transparent structure from steal mesh and wires. Thus two still isolated basic elemets appeared in his art as a sign of the future system - light and movement. The aim was to unite them. Using heat switchers was one of the first steps to create synthesis based on alternating off and on system of light bulbs highlighting the corded structure. The shape changed rhythmically at intervals. These pieces of art that arose in time had changeable light and composition structure. By introducing this technique Malina stepped beyond the traditional art and entered a new stage of his work - kinetic art. 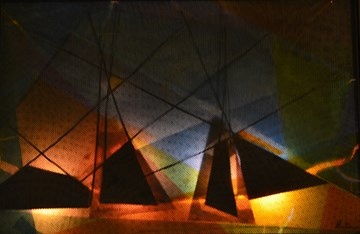 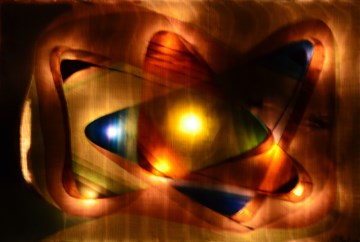 He started to think about a method that would enable him to achieve fluent contact of light and movement and where he would better apply his imagination. A completely new kinetic system resulted from his experiments and considerations which he named lumidyne.

From the technical point of view the system is surprisingly very easy and simple. It is inside a flat, less than 20-cm deep cupboard where there is a projection board on the front side. This board can enlarge quite unrestrictedly. Its base ranges between 25-200 cm. There are static light sources - light cables and candle lamps at the back of the cupboard. There are several discs powered by a very quiet electromotor with an average speed of one revolution per minute. These discs/rotors/ from a translucent plastic material are covered in coloured stains and surfaces of different thickness. The light that passes through touches the translucent board/stator/ where the basic coloured composition is painted showing the resulting figure of the painting. There is a matt projecting surface/diffuser/ in front of the stator, where the synthesis of light, colour and movement occurs. The whole system works as follows: white bulb's light changes its colour firstly when it passes through the revolving rotor and than it mixes with other colours in the stator and lastly it falls onto the ground-glass where there are vibrating coloured figures . The main basic composition does not change,  it only changes in outline, colours, light intensity and a few details which alternately turn dark and light. In this way the author has a total control of his main intention and also has unlimited freedom to express and choose a particular topic. In most of his luminous paintings Malina profits from his deep knowledge of astronomy, physics and other sciences that reflects in his ideas. His kinetic paintings of star constellations, galaxies, brain waves, molecules etc. have an extraordinarily evoking power because they depict the reality in its very essence - that is in continuous change and movement. 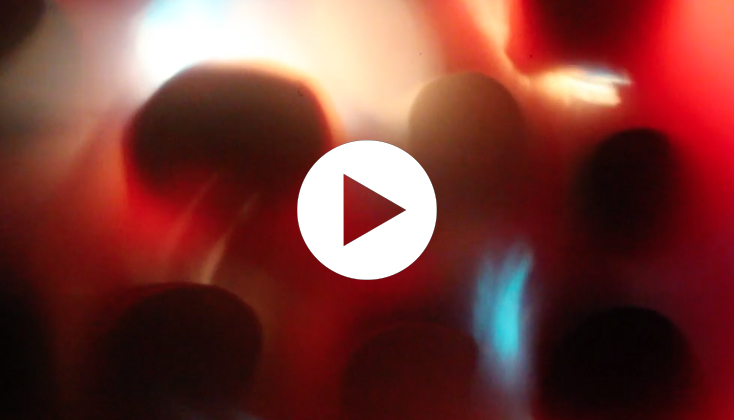 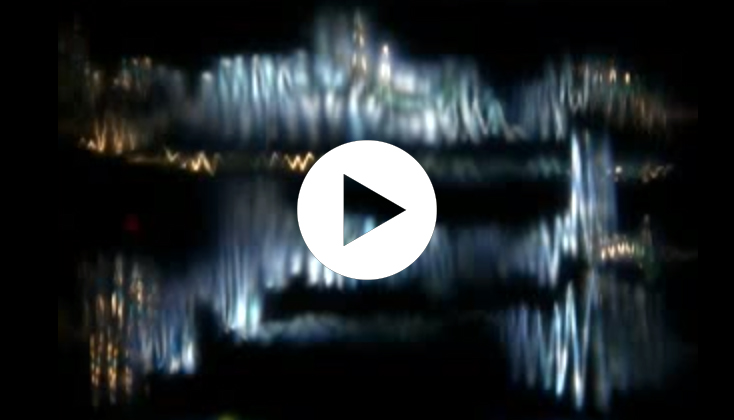 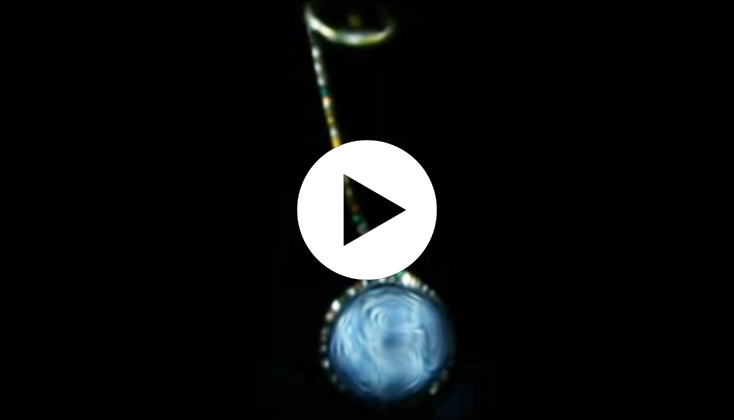 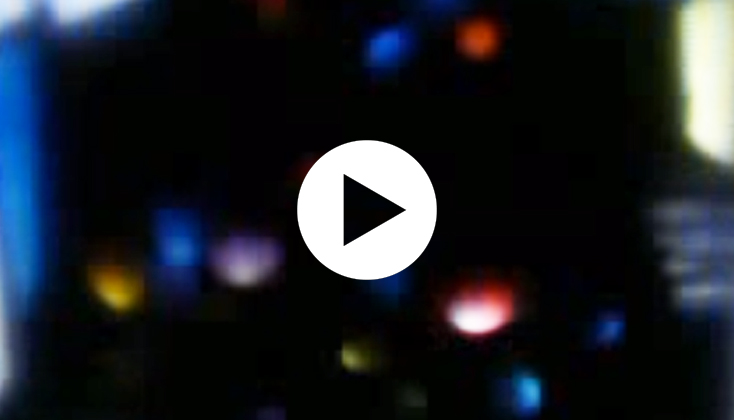 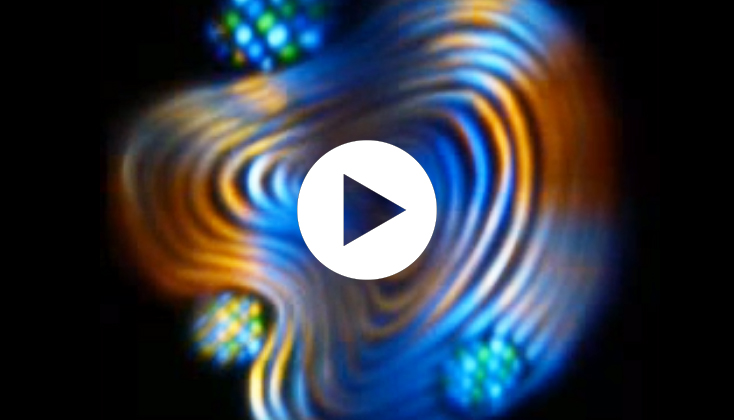 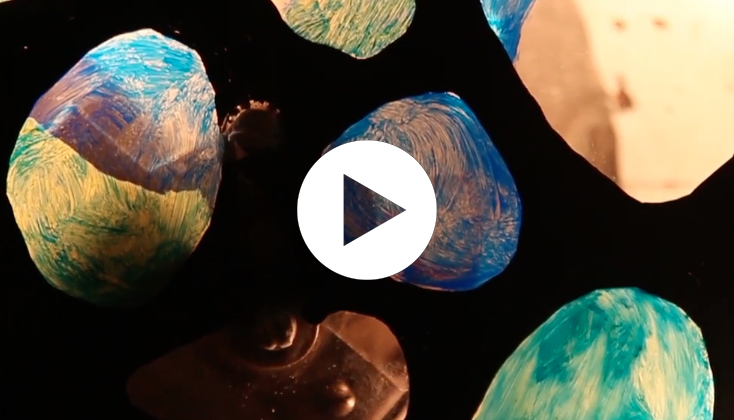 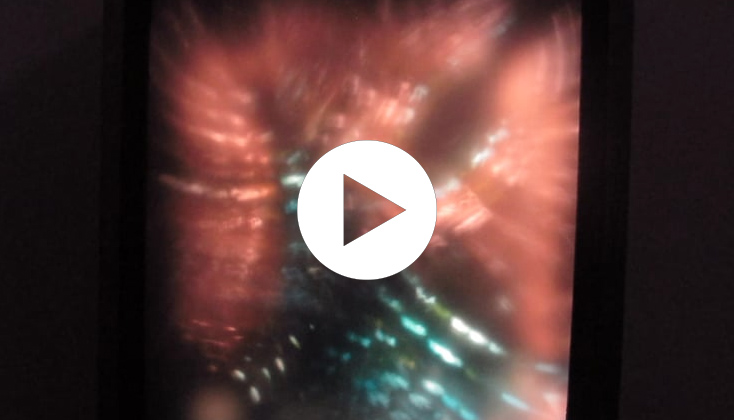 A new system of dyne reflection is developed after several years of experiments in his atelier at the beginning of the 60s. This system is based on a totally different technical principle than dyne of luminescence, although the outside form of the object stays the same. There are light sources inside a flat cupboard with a big front projecting board. The light passes through a revolving coloured disc and falls onto a rotating aluminium structure with irregular  crumpled-like surface which is reflected onto a transparent projecting board. On this board there are changeable and moving lyric lights that act on spectator's sensibility by different colours, shapes, rhythm and movement. Compared to the imaginative nature of dyne of luminescence, the dynes of reflection are more abstract. They do not have a fixed composition but they continuously change their shapes and colours and are more independent of particular contents

The inside of reflectodyne system

A third of Malinas systems-polaridyne-is based, as the name implies, on the screening of polarized light that continuously changes colour and light  of a fixed compositional outline. It serves primarily to express geometric themes and mathematical relationships or regular cyclical motions.

Dr. Frantisek Smejkal: taken from the article "Precursors and preconditions of kinetism" published in the magazine "Acta scaenografica" volume 6 No.11 (1966) 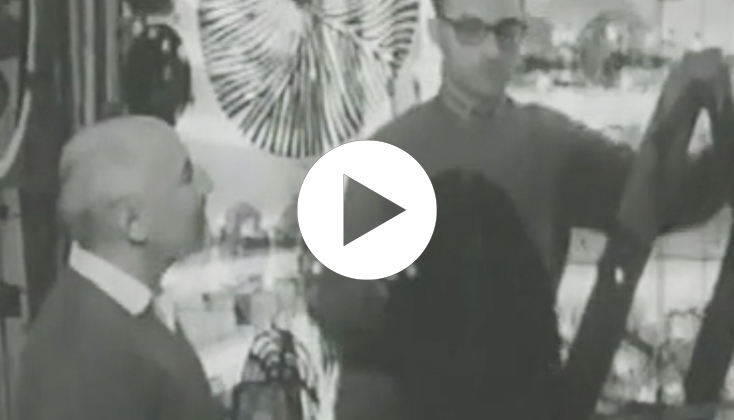 Malina in his studio 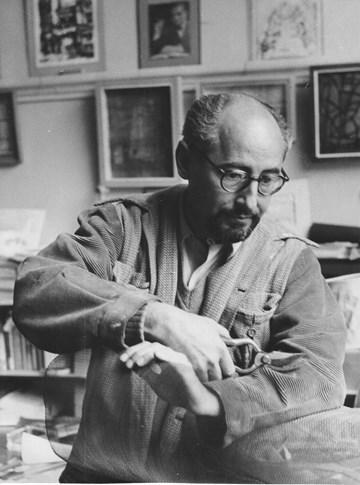 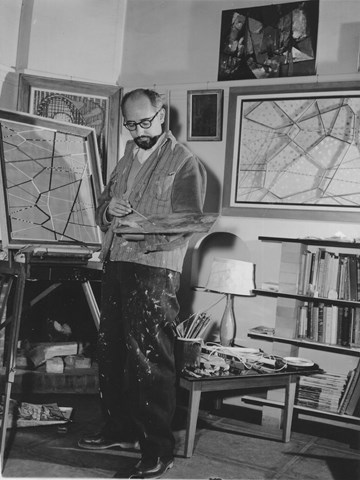 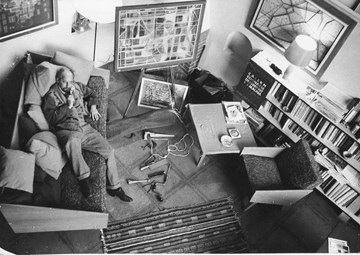 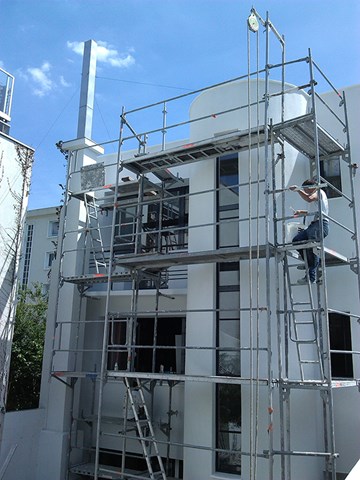 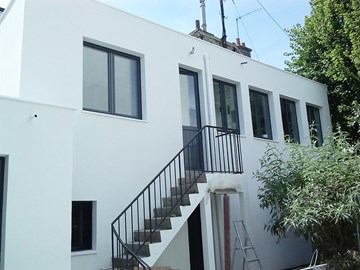